At the wonderfully eclectic fashion event that is Philadelphia Fashion Week, I found confirmation of an idea that has been percolating in my brain ever since I started interviewing Project Runway designers: Be true to your muse. Not a wildly original thought, you say? Well yes, you are correct, but so many of us forget that simple rule, and it ruins us.

We all know that making a living in the arts is practically impossible, yet there is something inside us that drives us to do this mad thing anyway. We can’t help it. We MUST make that hand painted dress, artful jacket, or spectacular wedding gown. So we do, and people around us see it, covet it, and once in a while, they actually buy it. We are spurred on. We make more, and then we start marketing.

This is where we hit our speed bumps. This is the dangerous time. Those that don’t always see the light of our muse will tell us that we need to be more mainstream to sell our work. So, wanting to make a real living with our work, we make changes. We pull back, and make things that are mere shadows of what we should be making.

This idea had been perking a lot, but I ignored it, taking advice from wiser, more successful people. I had heard many times that my looks were too costumey and bold. I listened, and for my last run up the hill with Project Runway for season 8, I made things that were decidedly—in my mind at least—not costumey.

I happily chatted with the other designers at the cattle call while I waited to see the judges, who are usually a couple of producers, and a Project Runway veteran. (Let me just say that back in my season 2 tryout, I practically swooned to see both Tim Gunn and Austin Scarlett behind the table.) This is my favorite part of the process. I love seeing what’s coming off the sewing machines of designers that hail from all over the country. It’s invigorating, and beautiful. I looked at my stuff, and theirs, and decided that I was indeed, not costumey. I smiled. Maybe this was the season?

Then I walked in to the actual interview, and the first thing out of Laura Bennett’s mouth is “It’s costumey.” I’m pretty sure I actually shrunk upon hearing those words I worked so hard to avoid hearing. This is when either my spirit broke, or it was liberated. I tend to think it bordered more on liberated.

So, I smiled on the outside, while in my head, I threw up my hands. I said out loud that I had heard that before, but these looks were made to urge Baltimore to be a bit less conservative, while being very wearable. (Yes, I was thinking fast on my feet.) I said in my own head: “It’s just not possible for me to NOT be dramatic and costumey—even when I make a great effort not to. I give up!” It’s a good thing I did, as I wonder what the four runway shows I did this season would have lost had I pursued the a more mundane look. Would I have gotten those invitational shows as a “not costumey” designer?

So that day either ended my career, or saved it. From the reactions that I am getting from my runway shows, it saved it. Pamela Ptak, whose own wonderful runway show I saw at that funny and amazing Philadelphia Fashion Week, cemented the idea in my head that I was on the right path. It seemed Pamela had had similar issues with which to tilt.

“I freelanced for [Ralph Rucci] for three years on both the New York ready-to-wear and the Paris Haute Couture collections. One night after a lot of the employees had gone home and there were only a few of us still there: Annarita (his head of workroom & top draper/pattern maker), Samantha (who handled workroom details, production, leather design work, etc & who’s also married to the noted glove maker Daniel Storto who designs for Ralph’s collections) and myself.

“Ralph finished in his office & came into the workroom to visit with us still quietly working. That night he told me that you have to stay true to your own vision & voice. He reminded me to never react to the advice from editors by changing your vision or straying from your calling as an artist. He said that he had followed the editors’ advice a few times and it led him astray and he’d had to work back to his own personal vision.

“That is the advice which I ‘forgot’ when I was on Project Runway and which I believe was a critical part of re-teaching me to stay true to myself. The architectural constructions, which I love so much, are my truest fashion vision. Now I make myself measure my collections the night before I show and brutally delete & purge what is not true enough. I think I’m doing OK so far, but I have to be stronger with it yet. I have a ways to go before I feel completely honest with my art because the clothes I love most take courage & time to create. And Ralph’s advice, though exceptionally good, is hard to follow. It’s hard to stop listening to the voices of generically defined comfort and walk into an unknown.”

So, she makes herself produce clothes that are even MORE non-mainstream, not less. My heart skipped a beat at those words. I was free! I had heard over and over again from designers on Project Runway that they wished they had stayed true to their vision. Losing a challenge was horrific when it was not work that came from their muse. If you did lose with work you loved, it was easier to bear, and the public got to see what you could really do…and many Project Runway “losers” like Austin Scarlett went on to wonderful careers, doing what they loved to do–not making things that they themselves didn’t like. Austin loved my work. I should have listened to HIS reaction. 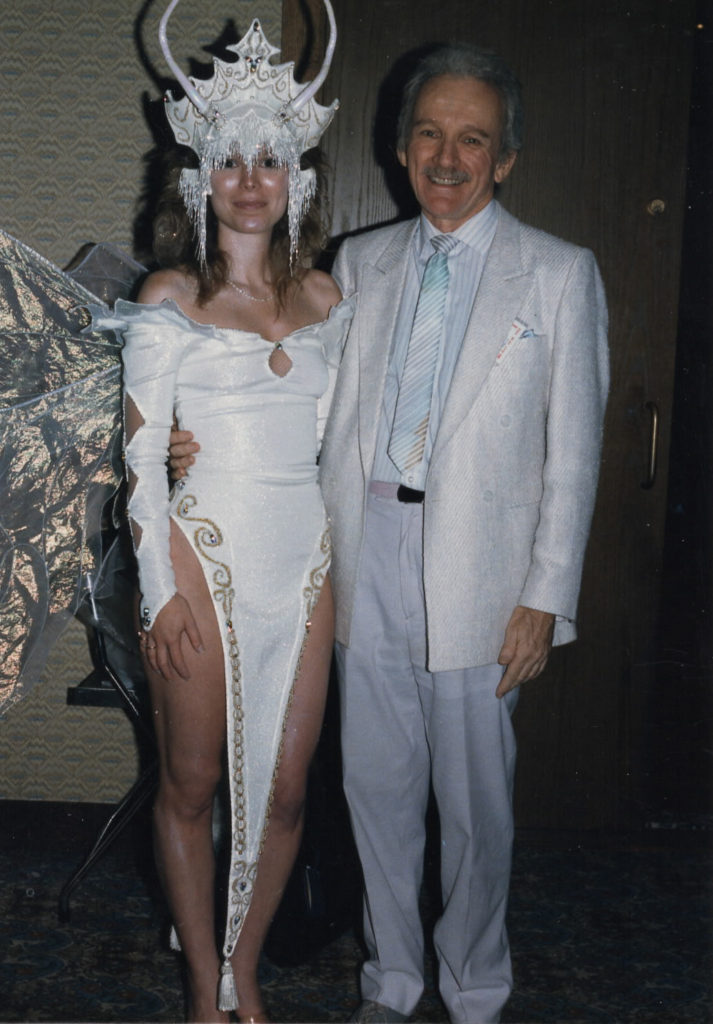 Wendy Ross Kaufman and the amazing Bill Theiss at a convention in Baltimore. He sought me out after the masquerade. If ever there was a clear indication that one was doing the right kind of work, this was it.

Artists, keep to your own muse. Be true to her, because you cannot find the kind of success we as artists crave any other way.

Wendy Ross Kaufman received her BS in Apparel Design from UMCP. She has worked as a costumer at The Folger, The Baltimore Ballet, local film, and theater where she has had several costume award nominations and won Best Costume for “The Wiz”. Her work appears in books, magazines, and on Bravo’s Project Runway DVD.