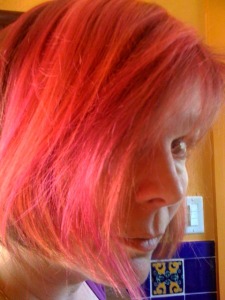 Wendy Ross Kaufman received her BS in Apparel Design from The University of Maryland in 1985. Since then, she has had her hands in bridal design, theater props and costumes, children’s clothing, teaching, performance art, fiber art, graphic design and writing about costume for The Examiner.com from 2009 until it closed in 2016.

Nowadays, all of these disciplines find their way into everything she does, and she finds that she is having an increasingly difficult time distinguishing why they were ever separate in the first place.

Her fashion audience is anyone who wants fun and fine clothing. Her clients want original and show-stopping outfits. They want the bridal dress that will be talked about for ages. They want the cocktail dress that will not be lost in the sea of little black dresses that have been de rigueur in the fashion world and held special events in a monochromatic choke-hold for ages. She was dubbed “The Betsey Johnson of Baltimore,” and revels in the title.

Upon moving to the San Francisco Bay area, Wendy immersed herself in the theater world as a costume designer. Her  productions have included: Lucky Duck, Little Mermaid, Starmites, Shrek, Mulan, Sound of Music, Mere Mortals, Alice in Wonderland and Triassic Parq, with her The Wiz grabbing the Best Costumes award from Broadway World San Francisco in 2013. Triassic Parq won her a coveted Best Costume nomination from The Critic’s Circle the following year.

Among other publications, her work appears in three coffee table books: “The Costume Maker’s Art”, ”Fiberarts Design Book IV”, and “The Costume Book”. You may also see her on Bravo’s Project Runway DVD, season one, and TLC’s “DC Cupcakes.” She sells her work at http://www.etsy.com/shop/sithich.